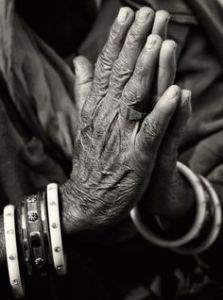 Once again on this trip I find myself in a church swaying and clapping in time to the rousing music and enthusiastic singing of the choir. Whites, blacks and Hispanics, young and old, well dressed and shabby are all here to experience the community of the Glide Memorial Church in San Francisco. All are welcome and this is made clear when after the first, and only prayer, given ad-lib by a long-haired black transgender woman, she finishes with “Right on, Amen, Hallelujah, Shalom, Salaam, Namaste”

Never before have I been to a church service where it has felt so inclusive, where there have been no bible readings or preaching. This was a surprise and at first I felt I was witnessing a performance, but as the “celebration”, which is how this Sunday morning event is billed, continued I was absorbed by the sheer joy and love that filled the vast, high ceilinged hall. They worshipped through the power of music and song. The live band was superb, the choir talented and their heartfelt singing was infectious and uplifting.

Several people spoke about the work of the church but none so movingly as a young black man, who with humility and honesty conveyed the non-judgemental support he had received by the community to extricate himself from a life of crime on the streets. It was clear that this church was more action than words, making a real difference to alleviate suffering and break the cycles of poverty and marginalisation that affect San Francisco.

We got to witness this side of the city as soon as we arrived in the downtown area of Market Street on a sunny Saturday afternoon. Emerging from the underground we heard incoherent shouting from a large black woman, dressed in tight black spandex, lurching unsteadily around her small mound of belongings at the top of the steps. She was targeting the trickle of tourists, being bold and brash one minute and then whining and pleading the next. We crossed the street in front of one of the iconic trolley buses, to our hotel, dodging glassy-eyed drunks and a foul smelling homeless man slowly propelling his wheelchair forward with his one good leg. We were nearly whirled in a full circle as a young white guy raced past us, two others chasing after him. It should have been a relief to retreat in to our hotel, but we had to wait on the pavement, the smell of stale urine all too pungent, as we waited to be identified and buzzed in. Our first impressions of where we had landed didn’t improve as we completed the paperwork with the greasy-haired receptionist through a barrier of Perspex. Not the most salubrious of places, but the room though spartan was clean and a base from which to start!

Having no desire to spend more time than was necessary in our stuffy little room, we dropped our bags and headed out to explore. We have stayed in down at heel areas and budget options many times during our travels, and have spent months in India which is renowned for its poverty and where large numbers of the population live on the streets as a matter of course, but for some reason we felt particularly unsettled by the sights and smells which greeted us. Perhaps, having spent the last few weeks in small towns and the wilderness and the last few days in the Carmel Bay area which is very chi-chi and sanitised, we were more sensitive and we found the contrast stark and poignant. I had thought that as time went on and I became orientated and tuned in to the “vibe” of this new city I would look past the filth and the suffering, that these assaults on my senses would blend in and recede in my experience. They never did and I am left with powerful images and feelings. The sheer number of people was overwhelming. There is an estimated 6500 number of homeless in San Francisco. The Market Street area is a popular hangout, but their presence is felt throughout the city as they meander the streets, block after block. Many have mental health issues and rant in the middle of the road, wagging their fingers at the cars as they pass. Animated conversations are had with invisible beings, and some just stand in a catatonic state, looking out from blank, staring eyes. Others have addiction problems and weave unsteadily towards us, cursing when we refuse to give them money, or just lie where they have fallen, sleeping off whatever substance has caused their brain to shut down. 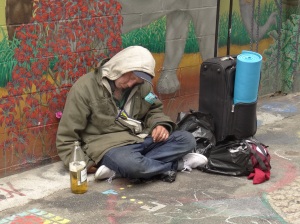 I have watched them shuffle along in barely functioning shoes, pulling behind them large wheeled suitcases and carrying bags full of their belongings. Some have purloined shopping trollies and these are piled high with cardboard to use as a make shift barrier against the fierce wind that can blow through these streets. Perhaps there’s the luxury of a pillow and whatever else they have collected over the years. I am curious to know what it is they keep with them, what practical possessions to make life a little more comfortable and whether they have items of a personal or sentimental nature that could tell a little of their story and a life before the streets. 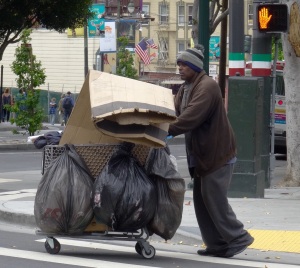 On the whole we are ignored as we pass by and although there is sometimes an edge to the energy between us, I never feel threatened. Being ignored makes it easier for me, perhaps easier for them too. It is heart breaking to see these broken lives, this limited existence. And yet I am also aware that these are my value judgments and that may be they don’t want my pity. I know there are services, hot meals, a shower and a bed available if they choose to access it. But of course these are limited and there are complex issues which can prevent help getting to where it is needed. Homelessness will never be eradicated. As fast as people are moved off the streets to various housing options, others will take their place. Suffering and hardship will always be part of life. But this level of suffering and hardship is something I have never known. How lonely and emotionally taxing it must be to live on the streets. How could I ever empathise or truly understand what it is like to live their life? And yet there are people like me on the streets. People who have had an education and a career, but for whatever reason have been plagued by poor choices or bad luck and have found themselves with nowhere else to go. Here by a twist of fate. These are the ones who are able to look you in the eye, to engage in conversation and wish you a cheery “have a good day!” even if you fail to put coins in the paper cup they proffer. 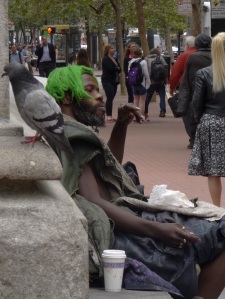 Much of what I see and smell on these streets, the filth, the human excrement, the poverty, the anger, the craziness, the loneliness, the dehumanisation is ugly and abhorrent. And it is all the more stark against the backdrop of this beautiful and vibrant city. So much wealth and commercial abundance and so much inequality and marginalisation.

Praise be for the folks at Glide who give their time and compassion to help those who, for whatever reason have less than them. As I walked back out on to the streets after spending an hour in their company I felt inspired, cheered and extremely fortunate. Even though I disliked being in the Budget Hotel I did at least have a clean and dry place to stay and I had choices. The choice to upgrade to somewhere with a bit more privacy, space and charm. Choices that so many people will never have. As part of my spiritual practice I often think of all the things I’m grateful for, the list was long and heartfelt that day. 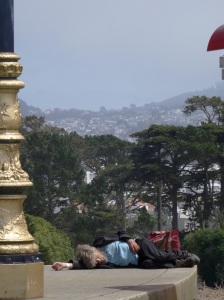 All that I witnessed during our time in San Francisco left me curious to find out more, so here are some interesting points about homelessness:

San Francisco is the “homeless capital of America” because:

It was a disembarkation point for service personnel from the Vietnam and Korean wars and many never left. Trained to fight in wars in different countries and cultures, scarred mentally and physically and simply unable to find a path back in to the society which once was home but now is as alien as those places in which they risked so much.

Some say the weather is temperate throughout the year which appeals if you are in the elements all day. This may be true, but it can get foggy and damp, and windy which makes the temperatures plummet. I’ve read conflicting opinions on whether or not people die here from hypothermia. My guess is that if your health is compromised, which is likely for the long term homeless, you could certainly freeze to death on these streets.

Until recently San Francisco had lax regulatory policies on homelessness

Drug use is widely accepted here and drugs are easy to source making it easy for those with an addictive personality to fall off the edge in to homelessness. Once there drugs are a way to obliterate the horrors of living on the street but can prevent any useful endeavours to find a way out of the situation

It has a good number of shelters and services

Generally the population is tolerant of their homeless community

A high ratio of tourists to get money from

Some of the reasons people become homeless

Some will sell the food they get in order to buy medication.

Although food is easy to get, public toilets are often the bastion of drug dealers, which is why the streets double as a toilet.

Many homeless are unable to get work due to ill health and/or employers view them as unreliable. They give up hope and get lost in the stagnant rhythm of existing day to day.